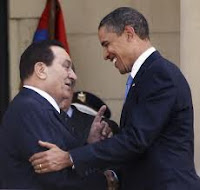 After the Jasmine revolution in Tunisia, Pharao country Egypt fell last night. President Hosni Mubarak resigned – most likely because the army refused to fire at the demonstrators occupying Tahrir Square for 18 days in a row. After Tunisia’s Ben Ali and Egypt’s Hosni Mubarak, who’s next? Ghadaffi of neighbouring Libya, Africa’s longest ‘serving’ president? In 1969, the then 27-year old Colonel Ghadaffi ousted King Idris 1st and became a King himself. Or will another Arab leader be the next one to fall?

What surprises me most, listening to the comments of world leaders reacting on the stepping down of President Mubarak, is their hypocricy. Yesterday they would have been proud to meet with the Egyptian leader, now they hasten to declare that he was a dictator and that the will of the Egyptian people prevails. They never raised their voices after rigged polls and elections confirming Mubarak in power. Mubarak was re-elected on four occasions: in 1987, 1993, 1999 and 2005. All US Presidents, without exception, befriended and flattered Mubarak: Ronald Reagan, Bush Sr., Bill Clinton, Bush Jr, and even Barrack Obama.

It is all about geopolitics. Egypt is pivotal in the Arab world, pivotal in the conflict with Israel . Meanwhile, the erroneous comments of CIA Director Panetta on events in Egypt underline my statement that many people who comment on events abroad are not really knowing wat is going on (see my January 18 posting).

The 25 January revolution started on Facebook when Google executive and political activist Wael Ghonim called for a demonstration against Mubarak. The power of an electronic social network was stronger than that of an aging, 82-year old President who clinged to power. Two weeks ago already his family had left Egypt and now Mohammed Hosni Mubarak follows – unless he will be arrested and has to account for his 30 years in power. A spokeman for Swiss banks today announced that the bank accounts of the Mubarak family were frozen. But why now and not earlier? It is alleged that the Mubarak family owns between 50 and 70 billion dollars, some sources even mention an amount of 90 billion dollars. If the US secret agency CIA knew this, it is implicitly co-responsible for the enrichment of the Mubarak family. The US goverment yearly transferred a billion dollars to Egypt. In case the US secret service agency wasn’t aware of the enrichment of the Mubaraks, the organisation is incompetent and president Obama has a serious problem.

This brings me to my main point. Egypt is among 18 African countries where presidential elections are scheduled this year. Governments in Europe and North America pretend they are genuinely interested in real democratic, multi-party elections in Africa. Are they really? Or do they not want to endanger the supply of vital raw materials like oil from Nigeria and Angola? Are they really more interested in peace in Sierra Leone, Liberia and Ivory Coast than in the high costs of human tragedies as a result of civil war and the connected risks of instability in the region? Are they really concerned about democracy in Kenya or Ethiopia or is their real interest the containment of islamic influence in East Africa?

And what about the US interests for the presidential elections in Liberia? Why should they bother? Is it genuine interest and sympathy for this small West African country and its three million inhabitants or just geopolitics combined with a hidden desire to get rid of the tens of thousands Liberians living in the USA?

History teaches us that it is self-interest and not altruism that dictates the agenda of Western politicians. Even if this results in hypocricy.

This entry was posted in Arab Revolution, Liberia. Bookmark the permalink.