Earlier this month a new web site and related blog was added to the many sites and blogs devoted to Liberia and Liberians. On June 7, http://www.thinkliberia.com/ was launched.

THINK Liberia or ‘Touching Humanity In Need of Kindness’ is a faith-based, Liberian, non-governmental organization established seven years ago, in 2003 – when the civil war was still raging – , a few months before the resignation of President Charles Taylor. A humanitarian NGO, ThinkLiberia focuses on the rights and well-being of women and children, notably ‘war wives’ of fighting forces, other victims of sexual violence, and child mothers.

Since 2003, ThinkLiberia has provided the following services:

* Safe homes where victims of sexual violence are given psychological support;
* Rehabilitation homes in Paynesville/Monrovia and Buchanan;
* A Learning Enrichment Program where children are tutored;
* A Participatory Action Research Program focusing the reinteration of girl mothers;

Recently, the Director of THINK in Liberia, Rosana Schaack, was one of the recipients for the Distinguished Leadership Award for Internationals by the University of Minnesota. Schaack was a student at the university (Humphry Institute of Public Affairs, Humphry Fellow 2008-2009). 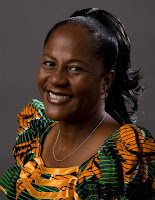 The Distinguished Leadership Award for Internationals is a university-wide award for alumni, former students, and friends of the university who have distinguished themselves in their post-university work as leaders in their professional careers. The selection committee for the Award cited Rosana Schaack’s role as a public servant, her work to empower the poorest of the poor, and her mission to bring hope to those he need it most. The committee lauded her passionate voice for justice for the young woman and children of emerging Liberia and her total involvement in the fight against gender-based violence.

Both web site and blog are worth visiting, they merit to be added to your favorites. People like Rosana Schaack and her co-workers deserve our admiration and support, they are the builders of a new Liberia on the ruins of the old Liberia.

The plight of the victims of sexual violence should be a concern of us all. Whereas the victims need to be catered for, civil society, politicians and judges in particular should strive to bring to justice not only those responsible for these criminal and heinous acts, but also those responsible for creating an environment of lawlessness making these atrocities possible.

‘Let Justice Be Done To All’ (official Liberian motto ).

This entry was posted in Liberia, Ordinary Liberians. Bookmark the permalink.