Today I was reading the daily and weekly summaries of the Trial of Charles Taylor site, that excellent initiative and project of the Open Society Justice Initiative. Again I was fascinated by what is happening a few miles from where I live and work. In the Special Court for Sierra Leone, housed at the International Criminal Court in a suburb of The Hague, former President Charles Taylor is defending himself against eleven charges. If convicted he could spend the rest of his life in an English prison – since the UK government has agreed to accept him in case the SCSL judges would find him guilty.

Taylor is denying all charges – which shouldn’t surprise. Last week he said that he did not order Sierra Leonean rebel forces to attack Freetown in 1999. In fact, he is denying everything, his contacts with RUF leader Foday Sankoh after May 1992, the murdering of Samuel Bockarie and Daniel Tamba, and giving orders for the execution of Superman, a Liberian commander of the RUF, Sierra Leone’s rebel group, responsible for so many atrocities and notorious for its mutilation of children and adults by hacking off arms (‘short sleeves’ or ‘long sleeves’). One of the prosecution witnesses, Joseph Marzah, a former member of Taylor’s invasion force, in 1989, and fighting force, the National Patriotic Front of Liberia (NPFL) last year testified that Taylor had feasted on Superman’s heart. Charles Taylor called prosecution allegations that he was involved in ritual sacrifice and cannibalism ‘racist’.

Taylor has no choice but to deny everything. He denied that he ordered the NPFL and RUF rebels to subject civilians to sexual violence and forced labor, that he used child soldiers who were drugged. He also denied giving orders to kill and eat the members of the Krahn tribe, or to kill UN and West African peacekeepers. He further denied supplying arms and ammunition to rebel forces in Sierra Leone in return for diamonds mined by the rebels in Sierra Leone, or allowing the RUF to have any radio stations in Liberia.

Taylor calls everything ‘a blatant lie’, dismisses witness’s evidence as ‘concoction’, and is in the ICC / SLSC court room as self-assured, flamboyant and charming as ever.

I had to think of two BBC articles I read a couple of months ago. In a series of weekly viewpoints from African journalists, former BBC editor and Ghanaian minister Elizabeth Ohene wrote about her encounters with Charles Taylor. Read her account here. It makes fascinating reading. It tells about the multiple faces and roles of Charles Taylor: a rebel and soldier, his presidency of Africa’s first Republic, and now defending himself in a high-profile criminal case, being the first former African President to stand trial. 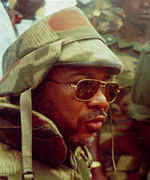 In another article BBC’s Mark Doyle looked back at Charles Taylor’s life.

Whatever one may think of Charles Taylor being guilty or not – and personally I have few if any doubts – Charles Taylor, from his invasion in Nimba County in December 1989 to his trial in The Hague in 2009, has already entered Liberia’s history as one of the most fascinating personalities of Africa’s oldest republic.

This entry was posted in Charles Taylor, Liberia. Bookmark the permalink.