‘Let Justice Be Done To All’

The booming economy of the 1950s and 1960s enabled the construction in Monrovia of (then) prominent buildings such as the Capitol (1958), the Executive Mansion (1964), the City Hall and the Temple of Justice. The inscription ‘Let Justice be Done To All Men’ on the Temple of Justice on Capitol Hill was certainly inspired by noble thoughts. However, it was disputed as from the beginning, and for three reasons: 1) because of the lack of rule of law, 2) because of the existence of unjust laws and 3) because of the male chauvinistic and sexist formulation of this basic human right. Damaged during the civil war, the Temple of Justice was renovated in 2008 and to the joy of many the old description had been changed into: ‘Let Justice Be Done To All’. Still recently, the altered motto evoked many reactions. 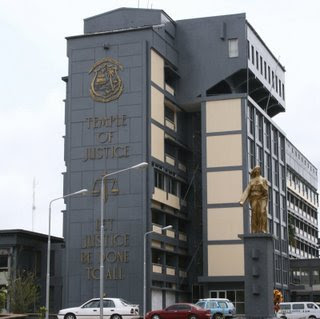 But ‘justice’ is more than changing mottos. Not long ago, Liberia’s Truth and Reconciliation Committee (TRC) released its final report on the civil conflict, 1979 – 2003. Last week it held a National Conference on Reconciliation in the Unity Conference Center in Virginia, Monrovia.

The conference once more demonstrated how divided the Liberian society still is, how fragile peace, how many challenges of reconstruction and national reconciliation exist and, last but not least, how difficult it is to ‘render justice to all’.

A group of war victims demanded reparations for injuries inflicted on them, the Chairman of the TRC called for unity, but the central issue was the setting up of a special court to try those accused of war crimes and human rights abuses during the conflict. Human rights activists spoke out in favor of the creation of a special war crimes tribunal – as has happened in neighboring Sierra Leone – but in the end conference delegates failed to sign a resolution calling for the prosecution of warlords.

Early June already, one of the most notorious warlords – now Senator for Nimba County – Prince Johnson, revealed the existence of a list of names of 110 former fighters, including Charles Taylor’s warlord Roland Duo as well as his name (Prince Johnson). He again warned that he would resist any attempt to prosecute him: ‘I am saying again that any attempt to arrest me, there will be trouble.’

Other former warlords called for unity and reconciliation and begged for clemency: Alhaji Kromah, former ULIMO leader, now Professor of Mass Communication at the University of Liberia, Roland Duo, NPFL commander, and ex-rebel general Moi Bleayu Moi, of the defunct MODEL, a rag-tag army from the east. Former warlord Boi is now a reverend, like another warlord-turned-pastor, Joshua Milton Blahyi (‘General Butt Naked’ who admitted to taking part in human sacrifices as part of traditional ceremonies intended to ensure victory over ennemies).

‘Let Justice Be Done To All’ – changing the Temple of Justice’s motto is easier than enforcing the rule of law.

This entry was posted in Liberia. Bookmark the permalink.