A good friend of mine sent me an interesting link to a 1958 movie of the visit of Prince Bernard of the Netherlands, the Prince Consort of Queen Juliana, to Liberia. The short movie, made for the Dutch National News Broadcasting Company ‘Polygoon Journal’, shows President William Tubman, Vice President Tolbert and other prominent Liberians.

Liberia in those days was a heaven for foreign investors and the movie shows pictures of ‘the world’s largest rubber plantation’ being Firestone’s, and of Bomi Hills, where Liberia’s first iron ore mining company LMC (also) exploited the richness of the Liberian soil. The Dutch were very present in the rubber and mining sector. Not commonly known, it was a Dutch geologist, H. Terpstra, who in 1934 had discovered the Bomi Hills iron ore deposits, and most of the Bomi Hills ore was shipped to the Netherlands.

Relations between Liberia and the Netherlands were strong in those days. In October 1956 President Tubman had made a State visit to the Netherlands. The picture below shows President Tubman and his family together with Queen Juliana, Prince Bernard and their four daughters, among whom the actual Queen Beatrix, in the monarch’s Soestdijk palace. 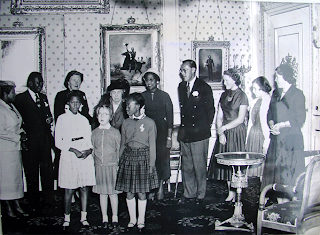 Prince Bernard would again visit Liberia in 1962 whereas Queen Juliana reciprocated with a State visit to Liberia in 1974.

The 1958 movie can be found here. Unfortunately, the accompanying text is in Dutch but for those who are interested how Liberia looked like in those days the movie is still worth watching!

PS With only 45,000 inhabitants, Monrovia then was one of the smallest capitals in the world.